16 Aug Melbourne ahead in latest data released by SQM Research 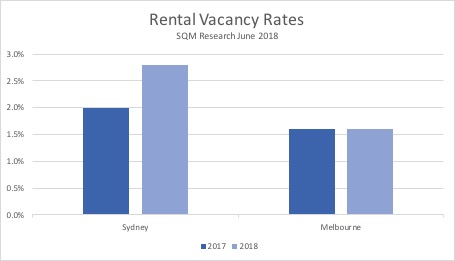 New data from respected research organisation SQM Research suggests that Melbourne is a “Landlord’s Market”. One of Australia’s most respected Property Analysts, Louis Christopher, this week revealed that vacancy rates in Melbourne have remained consistently low at 1.6% (June 2018), compared to increasing vacancy rates in most other capital cities. If you are a Caulfield Village investor, this is very positive.

With the largest population growth of all capital cities, one renter described securing a lease in Melbourne “almost like a battle with 50 – 100 people coming to each open for inspection”. This is compared to Sydney, where rental vacancies are at their highest level in 13 years (June 2018), compounded by falling rents year-on-year.